Alastair Hanton introduced Direct Debit to the UK, built up National Girobank, founded the Fair Trade Foundation, and through his transport campaigning saved countless lives. He achieved a remarkable amount of change over a long life of persistent enterprise and collaboration.

At Cambridge, Alastair read mathematics and economics but seems also to have studied kindness: all three subjects were to guide the following 75 years. In 1948 he joined the Government’s CDC (the Commonwealth Development Corporation) which planned the building of hospitals and roads in the poorest countries.  One of these was Malawi, in East Africa, where Alastair was sent in 1950, travelling by ship and train, and stopping off in South Africa where he was horrified to see the beginnings of apartheid – against which he later fought. After several years he moved back to Britain, met his future wife, Margaret (pictured above), at a set of traffic lights, and they based their life and family in Dulwich. In 1957 he joined ICFC (now 3i), a company nurturing new enterprises.  A year later he took a job in Unilever’s Economics and Statistics division and studied what made companies work optimally, doing job evaluation, and time-and-motion studies — which was to prove useful in his later work. While at Unilever he identified the problem of collecting money from regular customers – such as small shops – so he determined to introduce an efficient system whereby money could come direct from the customers’ accounts and, as he put it, “be taken in variable amounts at variable times.”  After a long struggle with the banking establishment he succeeded in introducing his system to the UK and Direct Debit was born.

In the mid-1960s he worked for RTZ (now Rio Tinto) analysing investment opportunities and using discounted cash flow (DCF) techniques.  He had helped to develop these analytical methods with his friends AJ Merritt and Allen Sykes, contributing ideas to their seminal book, “The Finance and Analysis of Capital Projects.” Alastair was one of a number of pioneers of DCF techniques which are a fundamental tool of the investment community.

Alastair became concerned that millions of ordinary people in the UK had no bank accounts and no access to financial services, so when in 1968 Harold Wilson’s modernising government suggested setting up a state bank he was given the job of running it.  The new National Girobank used the ready-made network of 20,000 post offices to bring banking to the “unbanked” giving them the means of saving, using cheques and being paid monthly directly into their bank accounts. By the time he retired in 1986 Girobank had 5,000 employees and had transformed banking: they had introduced computing, offered the novelty of free bank accounts, and empowered millions with their first bank account. Alastair’s team very deliberately located the bank’s operations in Merseyside (Bootle) because they wanted to create jobs in one of the most impoverished parts of de-industrialising Britain, even though it committed him personally to commuting regularly on the overnight sleeper train between London and Liverpool.  Through Girobank he was responsible for initiating the LINK network of cash machines – until then each machine was tied to one bank, but the LINK network allowed people to use their cards to withdraw cash from any cash machine.

Despite running a national bank full-time, he found time to set up several campaigns and charities such as the Ethical Investment Research and Information Service (EIRIS) which helped ordinary investors to influence how companies behaved.  Through EIRIS, Alastair and Peter Webster were enabling the UK’s first ethical investment funds – which could, for example, choose to avoid tobacco or weapons manufacturers.  He believed that it mattered how individuals use their assets: he and his wife, Margaret, shared their house in the 1960s with a young Nigerian family, and decided to leave the bulk of their estate to Christian Aid and other charities.

Alastair was instrumental in setting up new organisations over a period of 50 years. His formula for creating change was this: work out a logical vision of what needs doing, collaborate with others, be persistent and patient, and never say anything unkind.  After he retired he used this approach in dozens of new campaigns mostly for better public transport.

As a child Alastair had witnessed the carnage caused by the introduction of the motor car and in the 1970s he was appalled by an annual death toll of more than 7,000 lives and thousands of life-changing injuries.  By 1980 the company car tax perks had massively distorted travel and led to a damaging increase in car usage and in bigger more dangerous cars. He wanted these tax breaks abolished and with Transport 2000, of which he was treasurer, formed the Transport Taxation Group to take on the motoring lobby in persuading the government to remove the tax distortions. The ultimate success of this fight and his other safety campaigning contributed to the cut in annual road deaths by two thirds to 1,700 and even this year he was working to reduce that number further.

On retirement he became vice-chairman of Christian Aid and helped the leadership team to redirect the whole organisation – they pivoted towards empowering local people of all faiths and campaigning for systemic change. He would often ask at meetings, “but what are we actually going to do about this?”  One such meeting was a Quaker-led Trade Justice group where he asked if the power of consumers could be harnessed.  The group, which he led, became the Fair Trade Foundation and invented a process by which, in exchange for being permitted to use the “Fair Trade” label on coffee, tea and bananas, the supermarkets would guarantee the payment of a fairer price to producers as well as paying a small royalty.  As a result, farmers – like the ones he had known in Malawi in the early 1950s – would be able to lift themselves out of poverty. Fair Trade has helped millions of people as well as raising the profile of trade justice.

Alastair loved campaigning because it combined two his two favourite activities – making new friends and creating change.  He set up and supported dozens of traffic calming projects locally in London and nationally to save lives, improve quality of life, and build community.  One of these was the ETA (Environmental Transport Association) a green alternative to the AA and RAC.  Another was his campaign for lorry safety after he discovered how many road deaths involved unsighted lorry drivers reversing or turning left.  He worked on the “20’s Plenty” initiative to spread 20mph zones in residential areas nationwide which is a direct response to the logarithmic link between a vehicle’s speed and its lethality. He developed Road Peace which memorialised a road death and then used the facts of the case to help traffic planners to make that location safer for others.

Alastair chaired Living Streets, an organisation that lobbies nationally for pedestrians, healthier public spaces and for walking as a key mode of travel.  Locally he was a founder of the Dulwich Society and was an activist for traffic calming and car-free places across Southwark. A typical project was the creation of Herne Hill “Square” which took a team of local activists 10 years to achieve but has enabled the establishment of a Sunday market and a pedestrian zone at the heart of the community. 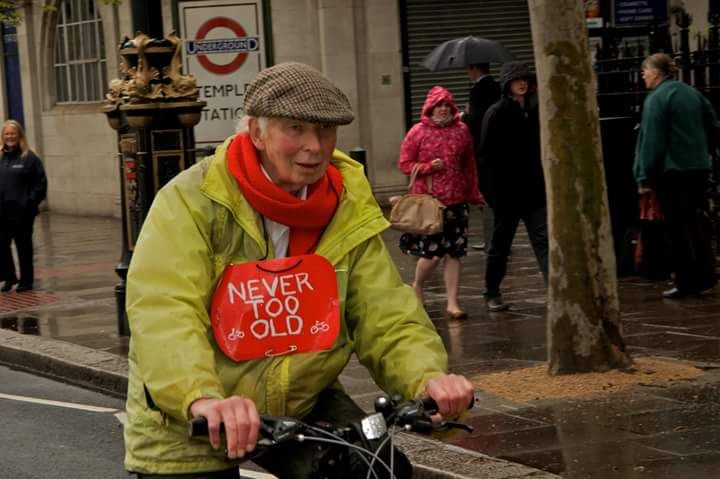 His interest was always in identifying the most important issues where change was possible.  Rebuilding the Herne Hill Velodrome was one such and although it took several years the result was the creation of place where thousands of young people are learning to love cycling as he did.  This passion started when he and his brother Graham cycled back to London from Cumbria, where their school had been evacuated to.  Much later, in his “retirement”, he chaired the London Cycling Campaign which lobbies for healthier travel and, as he put it, “tries to tame the car menace.”  He rode his bike for almost all journeys within London until he was 90 and Southwark Council recently used a picture of him on his bike as their “poster boy”.

When he was almost 90 he helped Dr Simon Norton, a maths genius, to establish a new charity, the Foundation for Integrated Transport (FIT).  This has become the leading grant-giving charity for creating greener transport in the UK.  He also helped many of the projects FIT funded, including especially Vision Zero and Transport for New Homes, where in his 90s he joined in site visits to highlight car-based housing estates. Alongside Alastair’s work in the last few years building up FIT with the Norton family and other trustees, he continued to champion car-free transport in Dulwich including working with the Dulwich Safer Routes to School project.

Beyond campaigning, his other great hobbies were forestry and the church. In forestry he promoted the idea that individuals could own, manage and enjoy their own small area of woodland.  Apart from his own woodland in East Sussex where he practiced hands-on forestry, he actively supported projects to spread wider woodland ownership.  Closer to home he managed the Methodist Church Hall for 60 years and deliberately turned it into a community centre used intensively, for people of all faiths and of none.

Many of his efforts were never acknowledged but he didn’t care: as he explained to the family, quoting US President Harry Truman,  “it’s amazing what you can achieve if you don’t mind who takes the credit”.